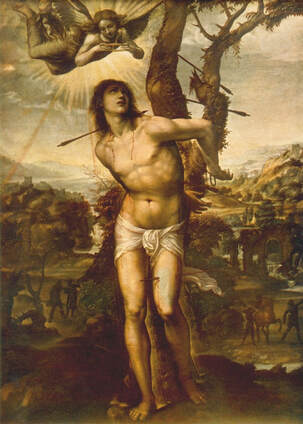 Saint Sebastian, our Church's Patron Saint
Saint Sebastian (c. AD 256 – 288) was an early Christian saint and martyr. According to traditional belief, he was killed during the Roman emperor Diocletian's persecution of Christians. He was initially tied to a post or tree and shot with arrows, though this did not kill him. He was, according to tradition, rescued and healed by Saint Irene of Rome, which became a popular subject in 17th-century painting. In all versions of the story, shortly after his recovery he went to Diocletian to warn him about his sins, and as a result was clubbed to death. He is venerated in the Roman Catholic Church and the Orthodox Church.
The details of Saint Sebastian's martyrdom were first spoken of by 4th-century bishop Ambrose of Milan (Saint Ambrose), in his sermon on Psalm 118. Ambrose stated that Sebastian came from Milan and that he was already venerated there at that time. Saint Sebastian is a popular male saint, especially today among athletes. In historical times, he was regarded as a saint with a special ability to intercede to protect from plague, and devotion to him greatly increased when plague was active.

With a large amount of Italian Immigrants coming to Middletown and the desire for a Church of their own in 1925, several committees were organized to solicit funds to build an Italian Church and through weekly Sunday solicitations from the Italian Families of Middletown they raised $85,000.  Bishop John J. Nilan approved the request after a second time a delegation was sent to Hartford for approval to build a Church for the Italian Community. After additional monies were raised during a time of economic depression the location of the Church was selected and approved by the Bishop of Hartford. Raymond C. Gorrani of Massachusetts was selected as the Architect for the Church and Salvatore Mazzotta, a local contractor was asked to build the church and local artisans assisted in the donation of materials to build the Church. The First Mass was held on December 06, 1931 by Father Santolini. The First Pastor of the Church was Father Rocco Guerriero . The Feast of Saint Sebastian was one of  the reasons why the Church was founded. The mortgage of the Church was paid in full in 1949 under the Pastorate of Father John J. Keane, the second Pastor of the Parish.

Disclaimer: This list may not be accurate with dates or names of priests.